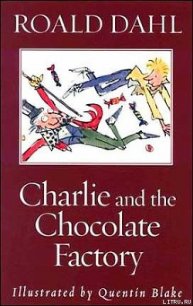 Charlie and the Chocolate Factory

This book is fantastic it is about a very poor boy named Charlie Bucket. He always goes to school with out a jacket because they don't have money to buy Charlie things. The setting of the book is an unnamed city; small wooden house on the edge of a great city,a fabled chocolate factory. The conflict is five children who have found golden tickets compete to see who will take over Mr. Wonka's chocolate factory. It all started when the newpaper announces that the Wonka chocolate factory will hide five golden tickets in the Wonka chocolate bars. Charlie desperately hopes he will find a golden ticket. The problem is that each year he gets a chocolate on his birthday, and he doesn't have money to buy one. Charlie father loses his job and the poor family is on brink of starvation. Charlie finds a dollar bill on the street, and before he tells his mother, he goes to buy two chocolate bars. One of the bars contains the fifth golden ticket. Charlie and his Grandpa Joe go to the Wonka Chocolate Factory. When the are finally there Mr. Wonka tells everybody to be careful,and not touch any thing from the factory. Then Augustus Gloop falls into the hot chocolate river while attempting to drink it, and gets sucked up by one of the pipes. Veruca Salt is determined to be a bad nut by nut judging squirrels who throw her out with the trash. Violet Beauregarde grabs an experimental piece of gum and chew herself into a giant blueberry. She is removed from the factory. Mike Teavee shrinks himself and his father has to carry him out in his breast pocket. So Charlie is the only one that is left in the factory. Mr. Wonka tries to find a person that would keep the chocolate factory. Mr. Wonka decided to give away his factory because he is too old. Then he decides that Charlie is the one who will run the factory exactly the way he has always run it. Finally Mr. Wonka congrarulates him for winning the entire factory for himself and his family.